Created 30-Mar-20
I first visited this operator almost by accident. In October 1969 I was in Pantdu on an unsuccessful search for the garage of Jones of that village which I was later to discover had been taken over by Thomas Bros some four years earlier. The bus that then turned up happened to be a Thomas Bros Tiger Cub on the service to Tonmawr, which only ran three journeys a day (this was a Sunday). An obliging driver waited for me to finish what was of necessity a brief visit and also ensured I made the onward connection with the United Welsh bus to Maesteg at Pontrhydyfen.

This brief visit made a very deep impression. It was an interesting fleet to be sure, but the location had a special atmosphere being up a dead-end valley and, as I had briefly been able to make out, a confusing array of old railways which sparked a lifelong interest in the railways of South Wales.

I paid two more visits in the next nine months, a further one in 1973 and then one more in 1978, other views are from original photographs I have acquired over the years and from other people's images that have been made available to me.

I hope you enjoy this look at a very interesting fleet painted (usually) in an attractive two-tone blue and cream livery. The depot had one of the more scenic outlooks, but sadly is now just housing.

** The gallery is now split into three sections, it was getting quite large and the change works better with the underlying structure of the whole series of galleries. ** 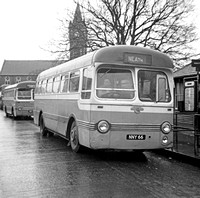