Created 15-Dec-12
Welcome to my gallery on Buses in Oldham. It was launched on May 12th 2013 to commemorate the Centenary of the first Oldham Corporation bus service, which started running from the Town Hall to Coppice on the same date in 1913.

In this set of galleries the aim is to chronicle all associations of buses with Oldham. The starting point is the service network as developed by Oldham Corporation. In separate galleries the story is continued right up to the present day through the SELNEC and GMPTE eras to First Manchester, but looks beyond the major local operator at all bus services that have operated in Oldham.

The Oldham Corporation fleet is studied in detail and the gallery also attempts to comprehensively cover the huge variety of vehicles that have operated from the former Oldham Corporation garage from the beginning of SELNEC PTE to the present day. The bus service galleries show all vehicles working the service, whilst the vehicle galleries only show vehicles actually working from Oldham garage.

Coach services are also an important part of the local transport scene and these are covered by separate sections which deal with scheduled coach services, the annual Wakes holiday specials and also the many local coach operators.

North Western had their own depot in Oldham and they have their own gallery devoted to the various depots and the services that were operated.

It must not be forgotten that buses were made in Oldham and there is a separate section devoted to Seddon buses and bodies built by their associated company, Pennine Coachcraft.

A final gallery includes buses in Oldham that don't fit in these categories, such as visiting vehicles and contractors' buses.

Completion of the galleries is a major task and will take several years. The site blog (under Gallery News on the menu bar) will give an update on major additions, but it should be recognised at this stage that the galleries are far from complete. Indeed, some of the subjects referred to above are yet to be covered. There is a lot of overlap with the Saddleworth Buses gallery so many of the pictures appear in both, but there is a lot of new material in this gallery.

Much though I have tried, it has been impossible to chronicle the whole story myself and I am grateful to the many photographers who have given permission to use their material and even entrusted me with their precious originals to scan. There are still many gaps and if you have material you would be willing to contribute, please contact me.
© David Beilby 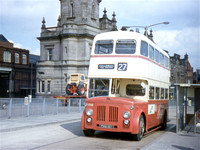 Oldham Buses not in service 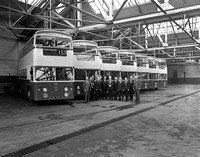