Created 6-May-13
Modified 13-May-19
Visitors 479
17 photos
This company has its origins in 1868 when George Barlow set up in business on Henshaw Street as a milliner, dress and mantel maker, tailor and coffin-maker. The business expanded to premises in Union Street West where there was room for stabling and carriages. Around 1908 the business was concentrated on the Union Street West site and it is still there today.

Early Barlow coaches were Lancia twenty seaters, which were advertised in the Oldham Chronicle for Wakes week in August 1927. Licence applications to Oldham Hackney Carriage Committee were in either the Company name, or A. M. Barlow. Excursion and tour licences were held by January 1932.

Livery was, as far is known, always cream and red until a revised scheme was adopted in the later years. It is also believed that nearly every vehicle operated has been purchased new. Barlow's was amongst the early operators of Leyland Tigers in the town, taking delivery of their first, a TS1, in May 1931.

In July 1948, Barlow's applied to renew licenses for 257 excursions, and ten tours of more than one day. A condition attached to the excursion licences for Blackpool, Bispham, Cleveleys, Southport, Morecambe, Rhyl, Colwyn Bay, Llandudno, Bridlington and Scarborough was that period return fares were authorised for the period of the Oldham Wakes holiday fortnight. The post war fleet was impressive; at first several Bedford/Duple 29 seaters were acquired, and then three distinctive AEC Regal Mark IIIs with preselector gearboxes and full front Burlingham sun saloon bodies, registered GBU 1 to 3. A real gem was the 1951 Leyland Royal Tiger with a Harrington 'dorsal fin' body, registered by the coachbuilder as LCD 796.

At Oldham Wakes and other such such busy times many other operators' coaches were hired, featuring those of Claribel of Ardwick, Mills and Seddon of Radcliffe, Finglands of Rusholme and Tatlocks of Whitefield. Connaught Street and Cavendish Street were fully lined with coaches of various hues at such times early in those early 1950's summer mornings.

At this time Barlow's provided the coaches for transporting both Oldham Athletic Football Club and the town's Rugby League Club. Oldham Athletic eventually acquired their own coach – its registration was 355JNW - a 1964 AEC Reliance with a Duple Northern Continental body in a blue and orange livery.

In 1955 some of the of the Barlow family were involved with former Oldham coach operator Jack Eastwood's sons, Bill and Buckley, to form the Eastwood and Barlow company. As far as is known the company never actually operated, but later that year the same persons incorporated Pleasureways (1955) to take over the business formerly operated by Tom Shaw at Union Street. The Pleasureways Company operated quite separately from the Barlow business, the only apparent connection between the two was that Barlow's sometimes tagged on an additional consecutively registered coach to their own order for the Pleasureways fleet. Barlow's fleet in the late 1950s included a number of Bedford SB's, with Duple bodies, and in the 1960s some more SBs which were registered by Plaxtons of Scarborough who built the coachwork.

The Company carried on in much the same way, with high standards continuing to be maintained. There was considerable variety of chassis in later years after the earlier standardisation on Bedfords, with Bristol, Leyland, Volvo, AEC, Ford and DAF chassis being bought before the last vehicles which were on MAN and Dennis chassis.

Coach operation ceased on January 31st 2006, the final fleet comprising six coaches. Increasing regulation was a key factor in the decision to leave the industry. The funeral part of the business is still trading and must be one of the oldest surviving businesses in Oldham.

Text based on notes produced by Peter Greaves.
© David Beilby 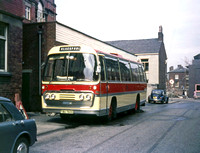 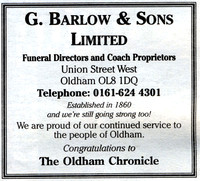